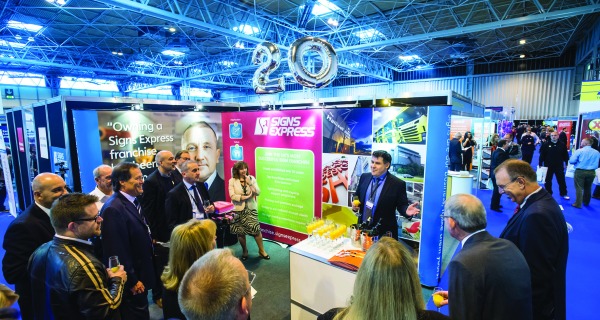 Leading sign making franchise Signs Express, is delighted to confirm they have been announced as a finalist for the BFA Express Newspapers Brand Builder of the Year Awards.  The prestigious British Franchise Association Award highlights the innovative methods franchisors are adopting to effectively develop their brand to boost their potential for the future.

The Awards, now in their 24th year, showcase the UK’s most exceptional franchisors that are driving business success through best practice, innovative strategies and building strong brands.  Founded in 1989, Signs Express has grown steadily to become the UK’s largest specialist signs and graphics company. The network comprises over 70 franchise sign production centres employing approximately 600 people across the UK and Ireland.  Signs Express has had previous successes with these awards, having been nominated over the years for both Franchisee of the Year and Franchisor of the Year Awards with great success.

On Monday 20th May, Signs Express will be moving onto the final stages of the selection process where they will be presenting to the judging panel.  The final announcement of the winner and awards will be presented at the BFA HSBC Franchisor of the Year Awards gala dinner on Thursday 4th July 2013 at the Honorary Artillery Company in London.

Seán Hammond, Head of Franchising, Express Newspapers, said: “The Express Newspapers Brand Builder of the Year Awards champions the franchisors who have implemented clever and innovative strategies to boost their brand recognition despite the highly competitive environment.  This Award offers a platform for high-performing franchisors to receive prestigious recognition not only at industry level but also to showcase their success amongst their peers and clients.”

In July 2011 Signs Express commissioned their first ever national customer survey of over 1000 businesses, to learn what their SME customers really thought.  The survey findings formed the basis of a nationwide PR campaign which benefited individual franchisees as well as the overarching brand, as well as proving valuable research data which has helped shape the company’s brand.

The results for Signs Express showed that it was clear that their visual identity did not reflect the values and perceptions of their brand and that they needed to update.

Signs Express wanted to embrace that they are a brand with tradition and heritage; whilst at the same time demonstrating that they are forward thinking, innovative, agile and current.  Signs Express developed a new brand proposition that runs through every area of their business, from visual identity to staff training; internal systems to PR - everything the company does is about expertise.

Using focus groups and a national survey helped to shape the direction of the re-brand for Signs Express.  The national sign company took the opportunity to refresh their logo by using a new bright and engaging colour palette, giving a fresh energy into the established brand.  All elements of the brand have received a fresh new look; from signage, literature and press advertising through to the company’s website and now the new company vans; which will be seen driving across the length and breadth of the country.

Signs Express Managing Director Craig Brown commented: We are truly honoured to have made it to the final stages for this award, it goes a long way in recognising the advancements and success of our recent rebrand.  We understood the potential risk involved with making changes to our established, successful brand.  We had to find out if our gut feel was right so embarked on many research projects.  It was clear that our visual identity did not reflect the values and perceptions of our brand, we needed to update.  The feedback and results we’ve received have reassured us that it was the right time for Signs Express to move forward and we’re looking forward to the future.”