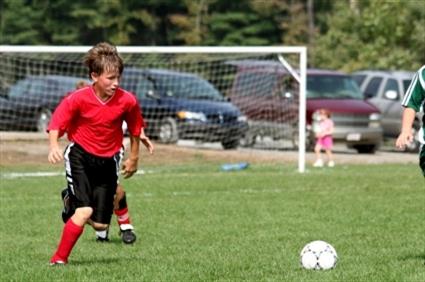 He wasn’t long out of university, but Gareth Simpson nevertheless brought an appreciable amount of coaching experience to Premier Sport when he bought it in June 2003.

As a recent sports science graduate his business skills were less developed, but with a franchisor there to provide administrative, marketing, and managerial guidance, the 28-year-old has been able to establish and grow his business.

Adam Bannister: Gareth, where did you get your coaching experience before joining Premier Sport?

Gareth Simpson: When I came back from university holidays I’d coach for Cambridge City, and while I was at uni I was coaching for Brentford. When I graduated I was playing semi-pro for Cambridge City, where we had the first full-time, non-league football coaching scheme. I took the schools from that over to Premier Sport.

AB: How did you come across the Premier Sport franchise?

GS: David Batch [founder and managing director of Premier Sport] knew me from Cambridge City; he was my manager for a bit. Premier Sport was really big in Hertfordshire and Norfolk, so coming from Cambridgeshire, I had the middle area. I didn’t actually have to pay for the franchise because I brought 30 schools with me.

It’s come on a lot since then. You get a lot more support, a lot more for your money. When I came over it was only about a grand for the franchise [it’s now £4k]. We were called Premier Soccer — we only did football when I first came over. I’ve sort of grown with it since then.

AB: Which sports do you coach now?

AB: With a background in football, it must have been a challenge to suddenly have to teach a plethora of different sports…

GS: Well the company is quite good. Originally we were all footie lads. But we saw a niche in the market where we could get paid for taking PE lessons, so our company put on level one courses for everyone in all those different sports.

AB:Has the franchise lived up to expectations?

GS:Yes, it’s really good. The community scheme I had been working on was something the football club did on the side. At Premier Sport we’re more geared towards the coaching because there’s more support.

It’s just got better and better every year. Within our first year we were sponsored by Umbro, and a year later we went to multi-sports. The business really grew. Since we went on the stock market, more and more people have been hearing of the company. Hopefully it’ll get to a point where everyone has heard of us.

AB: Do schools account for most of your business?

GS: Yes. We run lunchtime and after-school clubs and do PE cover as well. Then in the holidays we run camps.

AB: How big is your business now?

GS: I’ve worked in Cambridge for quite a few years, so I’ve saturated the area. I bought another franchise in Essex and I pay one of the lads I had working for me to run it. I’ve got nine lads who work for me now and we’re pretty much at the level where we’re doing everything we can do. I could get extra schools, because our literature is better than everyone else’s. It has been good — I’d definitely recommend it.

GS: There are a few independents and a few local football clubs like Cambridge United, but they’re not the best. They sometimes have a club somewhere and let them down, meaning we can go in there and run it instead.

AB: Has having a franchisor been helpful in terms of the administrative burden?

GS: Yes. There’s an office we can use all the time and we can order all our literature and everything from them. Generally, you get all the literature and support — but it’s up to you to be organised, distribute it, get in the schools, and get out there.

If you’re willing to put in the work then I think it’s a great business. But if you’re going to be lazy then you might as well go and work for someone else, so that you can leave work and forget about everything until the next day.

GS: Generally you’ll be working nine to five. I’ve got to the point now where I don’t actually do any coaching myself — I just have to promote everything, make sure my numbers are good, and make sure I make the maximum amount of money I can out of each course. A lot of the time I’m just doing paperwork, but when you first start you’ll probably be doing all the sessions yourself.

AB: Do you miss the coaching at all?

GS: Not really. Every now and then I go away or do a promo to try and get a school in, and because I’m not doing it every day I enjoy it. It’s like anything: you get sick of it if you do too much of it. When I haven’t been into the schools in a while it’s nice because the kids remember me.

AB: Does the franchisor give you a degree of freedom — for example, to come up with your own coaching routines?

GS: Yeah, you can do what you want. There are criteria by which you get assessed, because they want to make sure you’re doing good work. I couldn’t design a new session and have kids standing around in lines, waiting for ages and getting cold. But as long as it’s inclusive, there’s a bit of energy in there, there’s a bit of fun, it’s safe, and they’re learning as well, then you can do want you want really.

AB: What piece of advice would you give to prospective franchisees?

GS: Do your research beforehand. Know the area. If you bought a franchise and you had Manchester United Soccer Schools nearby, you’re going to do well to compete with them. If they’re doing one club in the holidays every now and then it’s OK, but if they’re in every school then you’re probably going to struggle.

Do your research, and then if you’re willing to put in the time the support is there for your business to thrive.