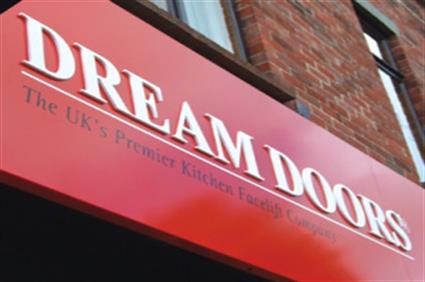 A husband-and-wife team has shattered sales records at Dream Doors in only their first year of trading as franchisees.

Achieving a £615,000 turnover, Mike and Elaine Hurley eclipsed the forecast for a typical franchisee’s first year of trading at the kitchen refitters by more than 300%.

The Oxford-based franchisees recently sold £187,000 of kitchens and kitchen facelifts in a single month – £69,000 of which came in a single, feverish day – smashing records in the company’s 12-year history.

The achievement is even more remarkable for its context: a global economy teetering on the brink of a double-dip recession and incomes being squeezed more than at any time since the Second World War.

“With empty shops on the high street and household names going out of business, potential franchisees are more nervous these days, wondering whether their money, and their futures, are safe,” says managing director Troy Tappenden, founder of the kitchen-door replacement specialists, who insists the recession hasn’t prompted any significant change to their approach. “We don't feel we are doing anything different than we've done before. We have a great concept, fantastic products and we deliver on our promises.”

Tappenden continues: “Mike and Elaine are certainly putting in the hours, but the rewards are there. And they've smashed last year's figures already, selling more in a month than some do in a year.

“That's a staggering figure for any franchised business at any time, let alone in the doom and gloom of the current economic climate.”

It could be argued that a kitchen refit is an expensive luxury and one of the first things people will sacrifice when times are hard.

However, the Dream Doors service – replacing shabby kitchen doors and drawer fronts rather than entire units – gives the impression of a brand-new kitchen for less than half the price of a like-for-like refit.

“As a brand we were up almost 20% in 2009 and 2010, and we're up even more this year. Dream Doors won't just ride out the recession. We're growing, and we're taking more and more market share every day.”