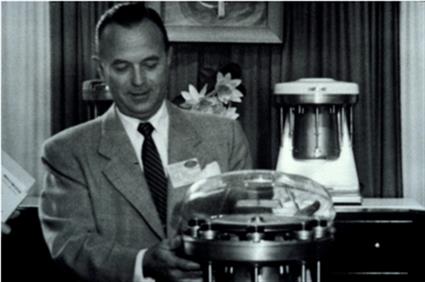 He didn’t establish McDonald’s himself; he didn’t even create the fundamental concept of serving burgers and fries quickly and at a low price.

But the global ubiquity of the iconic golden arches owes as much to Ray Kroc as it does the restaurateurs behind the very first McDonald’s outlet, Richard and Maurice McDonald.

Kroc’s genius lay in identifying and strengthening the features that made the restaurant special, expanding the chain rapidly, and imposing uniform standards of service and product delivery without stifling the entrepreneurial flair of its McDonald's franchise owners.

Born in 1902 to parents of Czech origin, Ray Kroc lied about his age so that he could train as an ambulance driver, during which time he met one Walt Disney. Kroc was due to serve in Europe during the First World War, but hostilities ceased shortly before his posting commenced.

Instead, the young Kroc spent his teenage years doing something rather more prosaic, selling paper cups. However, this apparently unremarkable period (although he also played piano for a radio station in the evenings) was not incidental to the story of Ray Kroc; working in the sphere of soft drinks led young Kroc to encounter something called a five-spindle multimixer.

The multimixer was a Great Leap Forward in the art of creating milkshakes. Kroc, who had also worked for a time in restaurants for room and board, spent the next 17 years traversing the United States selling the multimixers.

Of the countless eateries Kroc visited one in San Bernardino, California, stood out. McDonald’s employed a simple and, judging by the volume of trade, effective business model: the menu, limited to burgers, fries and beverages, was simple, so staff could prepare and cook people’s orders quickly and keep costs and therefore prices down. The choice of food even negated the need for tableware.

Kroc, who sold eight of the milkshake machines to the restaurant, persuaded the McDonald brothers to make him the brand’s franchising agent. Seeking to replicate the concept across the country, in 1955 he founded the McDonald’s Corporation and five years later bought exclusive rights to the McDonald’s name.

Although the rudiments that have underpinned the brand’s stellar success – quality, value and speedy service – were already in place, Kroc knew better than to tinker too much with a winning formula and had a keener sense of the model’s near-limitless scalability than the McDonald brothers. Why else would they have sold the company, later to become a multibillion dollar corporation, for just $2.7m?

Kroc was fiercely protective of the brand’s core principles. When his old friend Walt Disney insisted on a cut on each sale as the price for setting up an outlet in Disneyland he steadfastly refused to do something that would entail raising prices.

Not that Kroc failed to bring anything new to the McDonald’s model. For a start, he instilled into staff his own fastidious cleanliness. "If you have time to lean, you have time to clean," was a common reproach to idle employees.

He also pioneered the drive-thru, a concept which chimed perfectly with an increasingly time-poor American who drove everywhere.

Partly inspired by Ford’s automotive assembly lines, Kroc sought to make fast food even faster and more consistent, so that a Big Mac ordered in New York would resemble a Big Mac ordered in London and be ready in about the same amount of time. He also offered customers who had to wait more than five minutes or who received incorrect orders a refund.

The need to enforce a common standard across a fast-food empire which eventually spanned continents raised a fiendish problem which exercises franchisors to this day. But Kroc, who also popularised the mantra “In business for yourself, but not by yourself”, successfully balanced the need for central control over franchisees, ensuring that they followed a rigid, proven formula, with the need to empower restaurant owners to suggest improvements to the business model.

The creation of the Big Mac, Filet-O-Fish and Egg McMuffin by franchisees attests to the power of bottom-up innovation and the fact that franchisees are better placed to the improve customer experience, from which head office is remote.

Kroc believed McDonald’s success was also underpinned by the successful relationship between McDonald’s, franchisees and suppliers, which he likened to a three-legged stool, and the company became renowned for having the most integrated, efficient and innovative supply system in the food service industry.

Kroc also demonstrated great nous in marketing. By 1963 McDonalds had already sold around one billion burgers and this fact, he insisted, should be proclaimed in neon outside every restaurant.

In the same year a clown called Ronald replaced the company’s original mascot, Speedee. In America Eats Out, John Mariani wrote that: "Within six years of airing his first national TV ad in 1965, the Ronald McDonald clown character was familiar to 96% of American children, far more than knew the name of the President of the United States."

Appealing to adults and children alike but undoubtedly the latter in particular, the combination of burger and fries chimed perfectly with the 1960s zeitgeist. Children were becoming important customers in an increasingly consumerist society, while McDonald’s meteoric rise also coincided with the tail end of the postwar baby boom.

Beyond McDonalds, Kroc launched upscale burger restaurants, German-style eateries and even theme parks with unspectacular results. He also spent some of his $500m fortune buying the baseball team the San Diego Padres in 1974.

Of course, it was McDonald’s that defined him, and he served as chairman right up until his death in 1984 of heart failure. Even wheelchair bound, he would still call the owner of the local outlet to remind him to take out the trash or restock.

Kroc defined salesmanship as “the gentle art of letting the customer have it your way."

“I was an overnight success all right, but 30 years is a long, long night.”

“Luck is a dividend of sweat. The more you sweat, the luckier you get.”