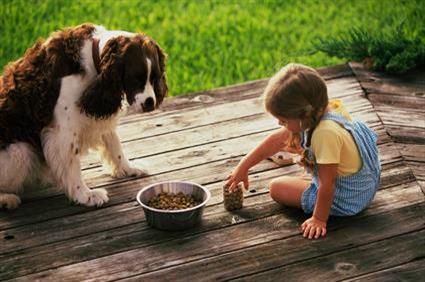 The British are renowned as a nation of pet lovers, to the point where we are sometimes accused of preferring animals to other humans.

It’s no surprise, then, that supplying food to our pampered pets is a lucrative business. Oscar Pet Foods has been franchising their trade for 10 years, and have seen their coverage of the country continually expand.

All Oscar franchisees work from home and require only a single garage alongside a dedicated room and telephone line, internet access and space for deliveries.

The company also asks franchisees to provide their own van, which must be white and in good condition – although it does not recommend a particular model.

Richard Dancy of Oscar explains. “The business works on the basis that customers can get better service with nutrition advisers. We train our franchisees in basic nutrition and they can give customers good advice that they won’t normally get at the supermarket.

“We also provide additional services such as microchipping and worm and flea control, all at a better price. And we make a point of calling our customers up and remind them that their pet food is due, so that they never run out.”

In addition to catering for dogs and cats, Oscar also provide feed for small animals, e.g. wild birds and fish, while also providing a range of health care equipment.

All Oscar requires from its partners is a franchise fee of £14,995 + VAT, which includes six in-house training days and five field training days. For that initial sum, franchisees are given a 30,000-household postal area, alongside the manual and computer software.

“You need to live in an area in which you are surrounded by pets,” Dancy adds. “But that is about 99% of the country. Only central business districts and strongly ethnic areas have low populations.”

Applicants have to submit to a behavioural profiling system “like Myers-Brigg”, used mainly to determine what sort of training is required. But there is, nevertheless, a certain sort of personality that suits the job.

“You need to be able to run your own business, and run your own accounts. You also need to be confident getting out and about, speaking to people on the telephone and meeting people in your area.

“It tends to be couples who join up, and one or other will fit into one of the roles. Sometimes one will be good at both paperwork and customer-facing work,” Dancy says.

Although he is happy to admit that franchisees are unlikely to make anything during the first 12 months of the business, he estimates – conservatively – that they should be turning over around £70k per annum. Of this, £12k to £15k will be pure profit. If trade is brisk, partners can expect to double that figure in subsequent years.

This is not a particularly stressful line of work. Oscar have people who work only three days a week and take home £30k per year.

“It’s all about getting yourself established,” Dancy explains. “It’s a sociable business in which people meet and talk – it’s quite easy to get referrals. Once you have 600 customers, your costs are pretty minimal. It’s all about economies of scale.”

The company also operates an incentive scheme. As a business increases in size, so does the territory –expanding beyond the 30,000 households originally allocated to a particular franchise.

This is not the only way to make money with the brand. It’s also an investment which can increase in capital value as well as providing you with annual yields, as Oscar franchises are transferable. One Oscar franchisee, for example, has sold his business recently for almost 10 times the initial fee.

The vendor is charged 50% of the Greenfield franchise fee and that pays for the new entrant’s training schedule. It’s important, Dancy says, that all Oscar businesses are operating to the same high standards.

Buying such a business can offer new entrants a step up the ladder – if, of course, they can afford the higher costs. But people entering the trade this way still have to fulfil the same criteria as those starting a franchise afresh.

Of course, in some areas this might be the only way to team up with Oscar, who already have 85 franchises in operation. Dancy believes that there is the capacity for around 300 in the UK, so there are still many areas without coverage.

Despite the nation's love affair with pets, Dancy is adamant that a love for animals isn’t a prerequisite for this line of trade – but adds that the desire to make money certainly is.

Jon Neale
Jon is a freelance journalist and has done a substantial amount of work for Dynamis. Before going freelance he worked at Estates Gazette, and has written a number of articles for the Sunday Times, the Telegraph, the Independent on Sunday, Retail Week, The Grocer, Square Mile, and Regeneration.