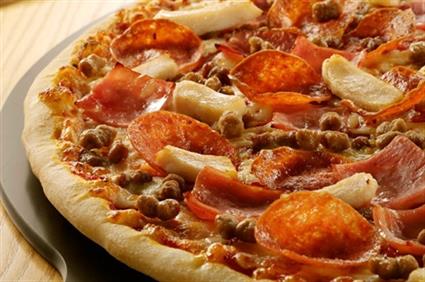 Pizza Hut is the biggest pizza company in the world.

However, there is a lot more to this success story than the deep-pan pizza. Below is a potted history of Pizza Hut.

And thus the famous Pizza Hut was born. The first UK outlet opened in 1973 and has grown from strength to strength since.

By 1972 Pizza Hut had opened a thousand branches throughout the US and was a hugely profitable American business.

A year later, it went international and restaurants were opened in Canada, Japan and the UK. The first UK Pizza Hut opened in Islington, London, but the famous pan pizza wasn’t introduced to British customers until 1980.

Come the late 1980s there were 100 restaurants in the UK and 5,000 worldwide, with a new UK restaurant opening each week. Pizza delivery was massively popular in the US so the first UK delivery unit opened in Kingsbury, London in 1988. By 1992 Pizza Hut was trading in 84 countries.

Five years later and sales had doubled, with 10,000 Pizza Huts open for business by the mid 90s.  By the end of the decade Pizza Hut UK had over 400 restaurants and employed 14000 people.

The Pizza Hut franchise programme began in 2001 and by 2006 there were 697 restaurants open throughout the UK, including 154 Franchise units owned by 61 franchisees. The fast-food chain employed more than 20,000 people.

In 2007 dine-in restaurants were re-franchised and Pizza Hut grew its network by purchasing Godfather's Pizza’s 28 stores in Ireland.

In 2010 the company turned it’s thoughts to giving back something to the community, and raised over £150,000 for the World Food Programme, a United Nations charity leading the fight against world hunger.

Pizza Hut has experienced changes in its British ownership since it started baking pizzas in the UK. In 1980 original UK owners PepsiCo entered into a joint venture with major British drinks brand Whitbread, which enabled the business to chart such heady growth.

Although the deep pan, the ‘grand pan’ and other renowned brands are sold worldwide, there are regional varieties to cater to different consumer markets. However, some recipes haven’t yet travelled to all of Pizza Hut’s international branches, including the whole shrimp cheese bite in Japan, which could contain an entire lobster.

But the triple cheese pizza (made from cheddar, camembert and emmental) and the cookie crust pizza, favourites in some South Korean restaurants, are a more acquired taste elsewhere!

From a franchise perspective, Pizza Hut is still expanding globally. UK franchise recruitment manager Nick Carnes says: “Our current focus on franchisee recruitment is unlike some others in the marketplace as Pizza Hut Delivery still has significant room to grow its core business.”