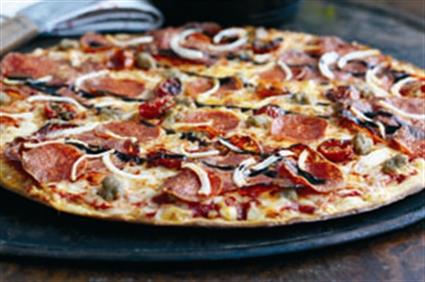 Number three in the industry, Papa John’s controls a huge slice of the £700m pizza market.

But with around half of its 120 stores within the M25 and swathes of the country unaccustomed to the delights of the Carnevale and the Hot Pepper Passion, this is a restaurant franchise with plenty of territories available.

Alan Mason, UK director of property and franchising at the company, tells BusinessWings.co.uk about an experienced, accomplished pizza franchise with plenty of room for growth.

Adam Bannister: What sets the Papa John’s pizza franchise apart from the competition?

Alan Mason: The quality of its product. It’s 100% fresh dough.

It’s the franchise opportunity as well.

Unlike Dominos, we only have 120 stores across the UK and Ireland. There’s a lot of opportunity for people to grow with us as a brand, whereas with other pizza operations, such as Dominos, a lot of areas are already taken up.

We offer an area development agreement. People can run one, two, three stores... they’re not curtailed to having just one store.

We like them to have their stores contiguous to each other – so if for example you had a store in Islington, London your next one would be in surrounding areas such as Highbury or Crouch End. This way it’s all easier to service and you enjoy economies of scale.

AB: Which areas in particular are ripe for growth?

AM: We only have one store in Manchester and that’s a corporate store, so that’s a key area we’re trying to push. We have opportunity areas around the country. We’re underrepresented in the East Midlands, West Midlands, North West – Liverpool, Manchester – South West, Wales and Scotland.

There’s a lot of opportunity for people to grow with us as a brand, whereas with other pizza operations, such as Dominos, a lot of areas are already taken up

AB: So how fast is Papa John’s growing?

AM: We’re probably sleeping giants in this country.

We’ll do the same number next year and maybe even more the year after.

The aim is to have 350 stores by 2016, so we’re looking to treble our store count in eight years. We’ve got 44 stores in London and we’ve identified another 40 areas where we can put a store. And that’s what we’d like to do in the rest of the country.

AB: Do they tend to be owner-operated?

AM: The majority are. Some franchisees have eight or nine stores, others have one or two. Some are family-run businesses.

We have people who buy it as an investment and employ operators with fast food or food service experience. These people often buy as many as five to 10 stores over a two and a half year period.

AM: Not necessarily someone with food-service experience. It helps, because you understand the business, but you could just have experience operating any other business or have been involved in business at various levels – then you bring a different outlook to it.

What we tell those people is that it’s sometimes good to have someone in your setup with experience in the fast-food industry. However, we offer a comprehensive, three-week training programme and ongoing training, so they can learn the business and operate it without prior experience.

And be willing to work hard. It’s a seven-day week business, not a Monday to Friday, nine-to-five job.

Our key hours are between 4pm and 9pm. Obviously Thursday, Friday, Saturday and Sunday are the busiest nights of the week, so you’ve got to be willing to work weekends.

If your family is involved, that’s all the better.

As a business, having people round you with people skills, business acumen, enthusiasm and a willingness to get stuck in is important.

AB: Are there guidelines the franchisee can follow to ensure he or she are representing the brand properly?

AM: We have a set of core brand standards.

We expect our franchisees to serve, 100% of the time, quality pizzas.

We score the stores, setting a minimum 75% pass rate. If they fail they have to ‘re-sit’.

Papa John's doesn't stand for a substandard product or operations.

AB: Do you change the menu often enough to keep customers interested?

AM: We’ve changed the look of our pizzas recently. We have 100% fresh dough and we’ve also gone for an authentic thin crust.

We are constantly innovating and developing new pizzas.

But also it’s got to be cost-effective. It’s no good saying you’re putting a particular salami on if there are cost implications for franchisees.

But I think we’ve got a phenomenal product that is different to what it was 12 months ago.