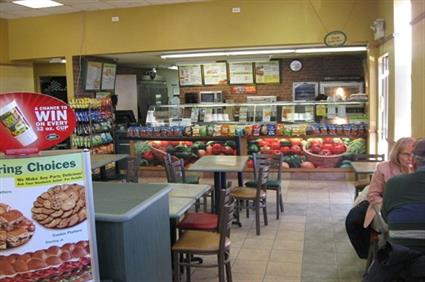 Mark Rannard never considered running his own business until he ventured into a sub sandwich shop for lunch one day.

Now the owner of seven Subway franchise stores in and around Liverpool, he’s proving more than competent in the role.

Prior to buying Subway franchises he was an audit manager at an insurance company, demonstrating that you don’t need culinary pedigree to run a sandwich franchise.

Subway seemed to become a major high street presence almost overnight, and is still expanding at breakneck speed, opening about six stores a week in UK and Ireland.

Boasting the speed, cheapness and convenience of fast food, Subway sandwiches are also healthier than pizzas, burgers or fried chicken, making it more relevant than ever in a world deep in recession, but still more health-conscious than ever.

BusinessesForSale: What, if any, businesses have you run before?

Mark Rannard: My Subway franchise was my first business.

I never considered running my own business until I saw an advertisement for potential franchisees while eating my lunch in a Subway store.

BFS: What attracted you to franchising as opposed to buying or setting up your own business?

MR: With a lack of experience in running my own business I wanted to take this first step with a high level of support in place to help me find my feet.

I was concerned about the risks involved in starting my own business from scratch and much preferred the Subway chain’s tried and tested methods.

BFS : What attracted you to this particular franchise?

MR: There were quite a few factors involved.

Most importantly I loved the products, and the franchise itself felt very simple and didn’t require a huge sum of money to set up.

I also saw a real future of growth in the Subway brand.

BFS : How did you raise the capital?

MR: I sold an apartment in Liverpool in 2003 which gave me some equity that I used to invest in my first store, along with savings I'd put together from my salary.

MR: It’s been the hardest thing I’ve ever done, but also the most rewarding.

We have been able to grow to seven Subway stores in the first four years of trading, which is a fantastic result.

Like everyone, we are facing a tough economic environment, but are combating this by being more efficient and customer-focused, which means we continue to do good business.

BFS : How does it compare to working for someone else?

MR: Now I’ve had the taste of owning my own business I don't think I could ever go back to working for anyone else.

Having the buck stop with you is tough, but far more enjoyable than working in a large corporation with no real control.

Even when faced with setbacks I have never once wished to be back in my old job.

BFS : To what extent does it bother you that you have no creative control – over decor, menu, prices, etc?

MR: Inevitably some parts of the franchise model are out of your control, but the benefits of operating under a brand like Subway far outweigh this.

A real plus for me is that I sit on the regional marketing board so get to talk to the Subway franchisor and have some input and involvement in how our menus and other marketing materials look and feel.

BFS : What advice would you give to someone starting out in franchising?

MR: If you’re willing to work harder than you ever have before, be open to the fact that some decisions affecting your business will be out of your control, and believe 100% in the product you are buying into, then franchising is for you.