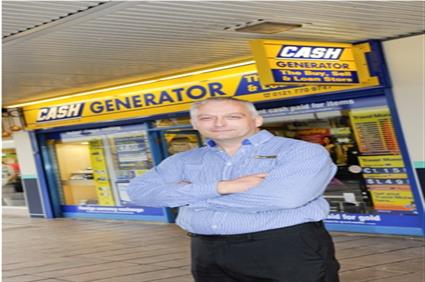 Mike Ashwin has been a Cash Generator franchisee for 12 years and has built up an empire of successful stores in the Midlands.

As one of Cash Generator’s many franchisees to operate multiple outlets, Mike’s entrepreneurial flair has ensured that his retail franchise business has gone from strength to strength over the last decade.

Previously a farm manager in Redditch, Mike ventured into franchising looking for a change in direction in life and a fresh career to challenge him.  After attending the Franchise exhibition at the NEC in 1998, Mike knew instantly that Cash Generator was the franchise for him.

“It was time for a change and the franchise exhibitions at the NEC is well promoted so I decided to attend to see what was out there for me.  After chatting to a number of franchise options, it was apparent that I felt most at home with Cash Generator.

“Their business model was tried and tested and their commitment to me was what finally sold it to me.”

Over the last 12 years Mike has opened up five stores in West Bromwich, Walsall, Stechford, Chelmsley Wood and his latest store in Birmingham city centre.

Mike is as busy as ever but has a talented team behind him.  Each store has its own store manager and Mike works closely with an area manager, who was one of the original shop staff when he opened his first store in West Bromwich in 1998.

“Since becoming part of the Cash Generator family, I have worked hard to achieve good results.  I couldn’t have done it alone, and have built a fantastic team to support me.  This has allowed me to grow my portfolio of stores and focus on providing our customers with a great service and a fair deal.”

A businessman in his own right, Mike believes Cash Generator’s support and advice is second to none, providing stability and assistance when needed, particularly in the early days.

“Fast paced, full-on and ever-changing; Cash Generator is an exciting brand to be part of.  In the 12 years I have been a franchisee with Cash Generator the network of stores has continued to grow, especially recently as shoppers continue to be savvy with their money.  Renowned for our fair and transparent trading, we are well positioned to thrive as people look for a bargain.”

Mike is one of Cash Generator’s most successful franchisees and is testament to what can be achieved with the discount retailer.

“After the hard work and dedication, you reach successful levels, the rewards are great.  I have established a good business for myself and am my own boss which is an invigorating feeling everyday.  Knowing that I can look forward to the future, and especially early retirement, is something that Cash Generator has given to me.”

Looking back on his success, Mike pinpoints the very moment he personally claims as his most successful to date – signing up with Cash Generator.

He concludes: “The moment I invested in Cash Generator I changed my life for the better.  That decision is one of my fondest, as without it I would not have what I do today.”