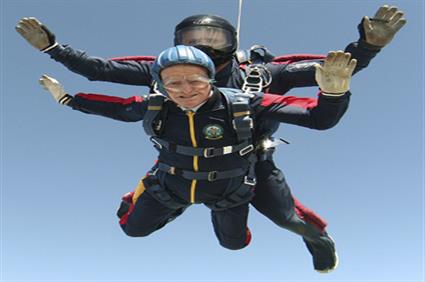 A 97-year old World War veteran has broken the record for the oldest person to tandem jump in the UK.

George Moyse, grandfather of Edward Brewer, general manager of the Auditel consultancy franchise, jumped out of an aeroplane at 10,000 feet to perform a freefall parachute jump, reaching speeds of 120mph.

Having served in the RAF during World War II in the Middle East, Moyse certainly had experience of such extreme situations, although he sought the permission of his doctor first.

His grandson agreed to join him on the jump, to raise money for the Royal National Lifeboat Institution and Royal Air Force Association charities – if the doctor sanctioned it.

“I told him if your doctor is mad enough to sign a certificate to say you can jump, then I’ll do it with you.

“At the time I thought I was on a safe bet. Then he rang me to say, ‘my doctor’s just given me permission to jump’, so I’ve ended up doing it with him.”

George got the idea from an advertisement in his local paper and thought it would be good. He said: ‘I’ll have a go at that’!

As well as his family, Flight Lieutenant Anthony Hutchinson from No1 Squadron, RAF Regiment awaited George on the ground in Wiltshire on 4 April.

He presented George with a large framed print of ‘The Battle of Al Waki Market’, a recent notable combat action in Iraq by No1 Squadron.

Edward and George raised more than £1.5k for charity.

A veteran of a major global conflict, George was apparently unfazed by the experience:

“It was lovely, I really enjoyed it. I wasn’t frightened at all.”