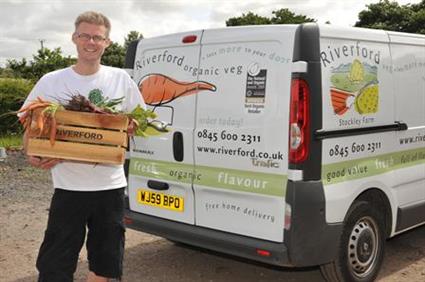 Since then, he has acquired the Liverpool territory – a move that has taken his turnover from an initial £700 a week to more than £300,000 a year.

Alan says, “Things are going well, and picking up after a particularly tough winter when you couldn’t get a cauliflower at Christmas for love nor money – they don’t like the frost! But there’s been what I’m calling the Easter bounce. Since then, business is flourishing.”

The 42-year-old father of three, who has been made redundant three times finally got fed up of having his working life dictated by the vicissitudes of the airline industry, where he’d worked for 20 years.

“Before taking on a grocery franchise, I worked on the in-flight foodservice and in-flight entertainment functions. After being made redundant for a third time in 2009, I knew it was time to make a change.”

Alan, who had always wanted to run his own business, but had never had what he refers to as the “light bulb moment” many entrepreneurs have, decided to look at investing in a Riverford franchise.

“My family and I had been customers of Riverford Organic for a while, and although you can’t really compare the fresh organic produce grown by Riverford to your average in-flight meal, as I’d already been working in a certain capacity with food, there was a natural connection.
“But when I contacted Riverford for the first time, to show my interest” he adds, “I was disappointed to find out that my closest territory, Knutsford, was already taken. However Warrington and Widnes, the next closest territory, was available, and so I applied for that and, following the application process, got it.

“At first, I wasn’t entirely sure how things would be as Warrington and Widnes are big industrial towns. But one thing I did know is that Stockley, one of Riverford’s sister farms, is engrained in the fabric of the community. Stockley has an ‘open farm’ educational program, and links with over 300 schools in the area. So every toddler and child in Warrington has visited Stockley farm on a school trip at one point or another. In spring and summer, the farm accepts three busloads of school children every day! So, the connection with Stockley farm really helped me get my business off of the ground. People who hadn’t yet heard about Riverford, knew about the farm, and so the relationship proved a real help in marketing my veg box business.”

Following the success of Alan’s launch in his new territory, another opportunity soon emerged, which the canny Scotsman was quick to take advantage of.

Tip of the Iceberg – and launch of a new territory

Says Alan: “When I first started, in 2009, I had just 45 customers and took £700 in my first week. I thought that was great, but now I’ve got more than 350 regular customers, I realise that was just the beginning.

He adds: “What happened next was that customers in Warrington started asking if I delivered to Liverpool. Well I didn’t, because it was outside of my franchise territory. So I contacted head office and asked them if I could have a wee crack at it. They said yes, and I babysat the territory for a few weeks – which meant there was no financial commitment, but I had the option to buy it if I wanted. What I discovered was that the business was definitely there in the city and surrounding areas. I bought the Liverpool territory and began operating in March 2010. Then, that summer, business went through the roof! One night, I started at the crack of dawn and didn’t finish making deliveries until 10pm. That was when I realised I’d have to get another driver.

“I did a lot of shows and really focused on promoting the Riverford brand and service to build the business, and the response outdid my expectations. I now formally own both the Warrington and Liverpool territories. It’s really hard work, and you have to put in the hours, but when it’s your own business, you’re motivated differently to when you’re working for a company – you know that your business will only be as successful as you’re prepared to make it.”