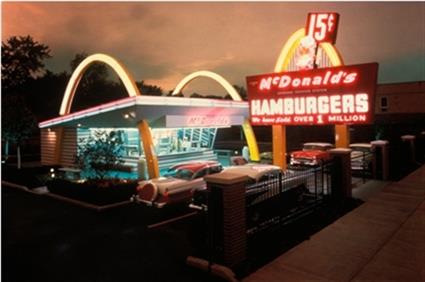 McDonald’s invented the concept of the fast-food restaurant and is a global giant in today’s food industry.

Starting off as a single, small restaurant 70 years ago, today the McDonald’s Corporation has more than 31,000 franchises in 119 countries and serves almost 47 million customers a day. It’s not surprising that a survey found that Ronald McDonald was more recognisable than Father Christmas to 96% of US children.

In 1940, Richard and Maurice McDonald, also known as Dick and Mac, opened a small drive-in eatery in San Bernardino, California. The restaurant originally offered a 25-item barbecue menu and operated a traditional American ‘carhop’ service, which meant waitresses, sometimes wearing rollerblades, would take food to people in their cars at drive-in restaurants.

Although the business was comfortably bringing in $200,000 yearly, the two brothers decided to close. However, they reopened the business eight years later, unaware that they were about to revolutionise the food sector.

Dick and Mac scrapped their previous menu and introduced hamburgers, milkshakes and French fries, food the burger-joint is universally known for today. The restaurant revolutionists also replaced carhop waitressing and set up a ‘Speedee Service System’, inventing a counter-service method and pre-made food production line, putting the fast in fast-food and establishing the principles of the modern quick-service restaurant.

The McDonald brothers also halved the price of hamburgers to 15 cents. Post-war America welcomed this unique eatery and it was not unusual for 150 customers to stand in line during peak periods, a growing popularity which saw annual revenue increase to $350,000. In 1952 McDonald’s was featured on the cover of American Restaurant Magazine, which prompted as many as 300 enquiries a month from around the country.

Neil Fox, a Phoenix gasoline retailer, was the first McDonald’s franchise owner and bought the concept for $1,000. In the beginning the founders only franchised the ‘Speedee Service System’, but when visiting the Arizona-based franchise the brothers were surprised to see an exact replica of their original business.

They had expected Fox to name the restaurant after himself, but when he told them he wanted to name it ‘McDonald’s’ the brothers were baffled. It is reported that Dick McDonald asked “what the hell for? McDonald’s means nothing in Phoenix.” Fox replied: “Why change it? It’s great as it is.” Dick and Mac decided they didn’t have a compelling counterargument so set about franchising the entire McDonald’s concept.

The decor common to all outlets, including a red-and-white tile building with a slanting roof and ‘Golden Arches’ either side, became quickly recognisable. This retro interior is a stark contrast to the revamped McDonald’s empire that stands today; however, the big yellow ‘M’ endures as one of the most iconic emblems in commerce.

In 1954, a milkshake machine salesman named Ray Kroc appeared on the scene. When he visited the San Bernardino McDonald’s it was believed Kroc said to himself: “This place will go anyplace. Anyplace!”

The 52-year-old businessman had tried his hand at many trades, including paper-cup salesman, pianist, jazz musician, band member and worked at an Oak Park radio station. And when he first walked into the McDonald’s restaurant, Kroc had intended to peddle milkshake machines but left as the owner of the business’s franchising rights and went into partnership with the McDonald brothers.

However, the relationship between Kroc and the McDonald duo was often strained. Dick and Mac were hesitant about shouldering the extra burden of franchising the restaurant throughout the country, whereas the enterprising ex-jazz musician didn’t see why the model should be any less successful in other states than it had been in Arizona. In 1955 Kroc opened the first restaurant in Illinois and the same day established the McDonald’s Corporation.

The franchiser only took 1.9% of the gross sales, of which the McDonald brothers got 0.5%. Kroc became frustrated with his partners’ willingness to take all the credit for the McDonald’s success story.

To gain full control over the company Kroc bought out the couple whose family name the company still bears today. In 1961 the fast-food pioneers parted with their business, receiving $2.7m and a continuing royalty of 1.9% on gross sales.

Immediately after his acquisition, Kroc pushed for drastic changes to the company’s image, and so was born the red-haired, stripy-sock-wearing clown Ronald McDonald, a mascot to appeal particularly to children. Revolutionising the menu, Kroc also approved new products such as the Fillet-O-Fish and Egg McMuffin, but no one could have predicted the popularity of another invention – the Big Mac, which sells around 550 million each year in the US alone.

Kroc believed advertising was a worthwhile investment that would ultimately reap dividends – and so it has. McDonald’s has used 23 different slogans in US advertising to date, and the company buys more TV and radio airtime than any other fast-food company. The global giant’s latest slogan is “I’m lovin’ it”, which was launched in 2003.

The corporation is the world’s largest chains of hamburger fast-food restaurants and employs more than 1.5 million people worldwide. McDonald’s has become emblematic of globalisation, sometimes referred to as the ‘McDonaldization’ of society, a term coined by American sociologist, George Ritzer. The concept is an extension of Max Weber’s classical theory of the rationalisation of modern society and culture. Ritzer describes McDonaldization as the process by which a society takes on the characteristics of a fast-food restaurant, highlighting four primary components: efficiency, calculability, predictability and control.