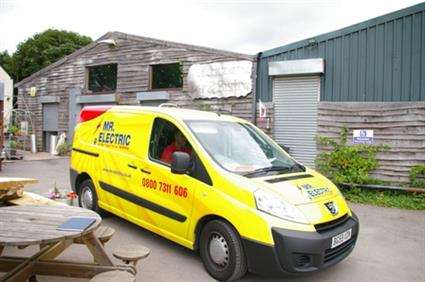 Mr. Electric is giving away a franchise in Aberdeen.

The successful Bromsgrove based franchise operation is reinforcing its’ commitment to the community and its’ belief in the franchising industry by co-ordinating the efforts of its’ suppliers and bankers to give away an electrical franchise.

This is a truly valuable opportunity which is specifically open to either unemployed electricians or unemployed budding entrepreneurs who in all respects other than one would ordinarily meet the criteria for franchise ownership.

This is truly an opportunity for somebody who has the “want to” but not the “how to” and by removing the majority of financial barriers, Mr. Electric hopes to create an opportunity to create real jobs in the area.

The franchise licence comes with the benefit of Homeserve operating rights for the next five years providing a base load of work on which to build.  Lloyds Banking Group are committed to providing both an initial working capital facility as well as on-going mentoring advice.

Agreements have been reached with Mr. Electric suppliers to assist in every way they can and the NICEIC with whom Mr. Electric has a special relationship have agreed a package of help and assistance in ensuring the business meets today’s exacting standards.

Prospective applicants will be required to prepare an outline business plan and should be able to demonstrate a fundamental understanding of the commitment to customer service, as well as business responsibilities.

The successful applicant will be selected by a judging panel which will include Richard Holden of Lloyds Banking Group, Brian Smart Director General of the British Franchise Association, a representative of Mr. Electric as well as one other yet to be confirmed.

Mr. Electric will be seeking help and support from all relevant sectors of the Scottish Business Community. Launching during Scottish Franchise week, our aim is to have business plans reviewed before the end of June in order that the candidate could attend July training.