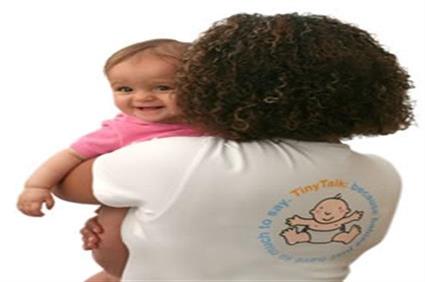 Katie Mayne is a slim, smiley mother of two – and it’s incredibly hard to dislike her.

I imagine she was probably one of those annoyingly lovely head girls who everyone wished they could be more like, but few succeeded.

An unusual series of rather fated circumstances followed, beginning with an appearance in front of Phillip Schofield and Fern Brittan on This Morning

Katie’s discovery that her first child, Harry, could communicate with her through sign language (know as pre-verbal communication), led her to launch a successful class teaching other mother’s how to similarly communicate with their small children. An unusual series of rather fated circumstances followed, beginning with an appearance in front of Phillip Schofield and Fern Brittan on This Morning.

Her energy is infectious as we sit in a coffee shop at this year’s London Baby Show. While coffee cups clunk around us and stressed out mother’s refuel on caffeine, we discuss the rise of Tiny Talk, which has expanded into Australia and New Zealand, where it is known as Tiny Sign.

Sally Grant: What happened in the run up to This Morning?

Katie Mayne: When I started up six years ago there was nothing across the UK.

I started running the Tiny Talk classes in Guildford in 2002. Everybody loved the classes and raved about what I was doing.

I got into the local paper and then another journalist rang me, saying: “I saw that article, have you had any national press, and do you want any?”

SG: Which magazines did you make it into?

KM: I got into Bella magazine at Christmas, and within a week of that I was telephoned by Granada television enquiring as to whether I would like to be interviewed on This Morning the following week.

SG: You must have been overjoyed...

KM: My response was ‘woo’! I was 20 weeks pregnant with my second child, although I thought this was a golden opportunity.

We did really ‘umm and arr’ about it; do we go for it?  I knew that if I went on television this would be a rollercoaster – and that is precisely what happened.

KM: I contacted a business advisor who was a specialist in franchising, so when we went on TV in February 2003, I knew it all. We had an eight-minute slot and I did a tiny plug saying I was looking for other teachers across the UK.

We were their highest rating for the show. The switchboard was flooded.

People were asking “how do I become a teacher?” and “have you got a pack?” From that one show we had hundreds of enquiries.

SG: You must have had to work pretty hard off the back of all those enquiries – especially given you were pregnant at the time...

KM: Yes! I did an information day for the teachers in May. I gave birth to Lucy in June 2003, did another information day in July and did a London-based show in October of that year, all with a three-month-old in tow.

SG: How have you managed juggling a successful business and being a mother?

KM: I have always had loads of energy, and I’ve been lucky.

I do a job that I’m passionate about. I think it’s good to have something that you believe in and which really excites you.

SG: What made you franchise the business?

KM: I could see myself being so successful that my classes would go across the UK, and to ensure that consistency of standard, I decided franchising was the way.

SG: Can you reveal the secrets behind your success?

KM: Running a franchise is about teamwork. If one person is letting us down then it’s really bad for our reputation.

Even though we have territories next door to each other, the reality is that mums don’t want to travel very far; they want something on their doorsteps on a weekly, regular basis. We don’t work against each other; we work to complement each other.

It’s about strength in numbers.

SG: How hands-on are you?

KM: I do all the interviewing and have the final say over who comes on board. Consistency is so important.

I am still very much involved.

I now have such an amazing team working for me; they all feel passionate about it. I am very, very careful who I have as teachers.

SG: Could you impart any advice to budding entrepreneurs?

KM: I always say, don’t go into any business unless you’re 200% in love with it and want to get it out there.

If you start a business and it takes off it’s a 24-hour job, and it is relentless. It does take over your life – but you want it to.

You live it, you breath it, you love it and you want to make it a success. It’s down to you and what you’re willing to put into it.

Sally Grant
Sally graduated in 2003 with 2:1 in English, followed by five years working for a number of businesses variously as an art buyer, photographer's agent and creative researcher.