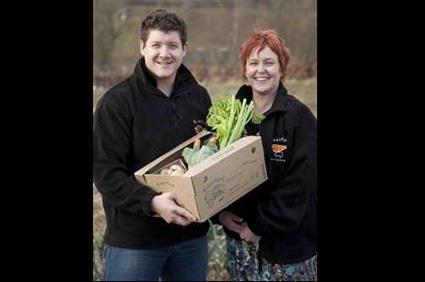 37-year old Hayley Dwyer’s main source of income was working as a consultant in the public sector.

But the downturn in the economy meant that the future was uncertain. With a new family to consider, she looked beyond her existing position and discovered Riverford Organic’s veg box delivery franchise.

Here she talks about the transition and how the move has given her added security and more time with her family.

FranchiseSales: What did you do before becoming a Riverford Franchisee?

Hayley Dwyer: I worked mainly as a consultant in the public sector providing virtual assistant services such as sales and marketing support. However, with the recession, money in the sector began drying up and I could foresee the need for my role disappearing.

That would have left me with no income and nothing to do, so my husband Andy and I started looking into buying a business.

FS: How did you become owners of the Guildford Franchise territory?

HD: It was actually a friend of mine in the public sector who drew my attention to Riverford Organic food franchises. She saw an article in a national newspaper on Riverford’s founder, Guy Watson.

He was talking about setting up a series of restaurants similar to the Field Kitchen, the company’s farm-based restaurant in Devon. He said that he was looking for entrepreneurial mums – which is what I consider myself to be – and so we phoned Riverford up. We were put onto the franchise manager, who started talking to Andy and I about the veg box delivery franchise.

As it was explained to us, we became more interested in that franchise model, which had already been going for ten years and has a lot of successful franchisees. For us, the fact that it was a proven business already was a pull factor.

On top of that, the fact that the Guildford territory, very close to where we live, was being sold by the previous owner gave us further incentive, and we decided to invest.

FS:  How did you prepare for the purchase?

HD: I spent about two or three months putting together a business plan, and managed to secure funding from a high street bank to buy the franchise, which was surprising as the banks really weren’t lending at the time.

We bought the business with £120,000, which included all of the vans. It was a huge amount for us to invest – certainly a lot more than the £9,000 is costs to buy a virgin territory – but you have to caveat that with the fact that you’re buying a proven business model with existing turnover and profit, so you already have something to work with and hopefully build upon.

Therefore, the risk for us was a lot more calculated, and I think that’s one of the main advantages of buying a franchise with an established brand – and also with buying a resale if you have the capital.

FS:  How were the first months of running the business, and how much have you grown the business by?

HD: During the first six months we spent most of our time really taking care of the staff and communicating with the existing customer base because, naturally, people were quite nervous about the change of ownership.

We also needed to get our heads around what was involved in the day-to-day running of a local organic food distribution business. Once we got through that stage, we started marketing more aggressively.

And while in the first year we only realised a one percent growth margin, we’re now much closer to three or four percent growth – still a little way off of our projected target of 5 percent, but very good considering the difficult economic climate we’ve been having.

FS:  What were the main concerns and challenges you had in buying a resale?

HD: Because we’d bought an existing business, not a virgin territory, there were seven part-time drivers and three part-time admin staff to consider.

It was a major adjustment for them having new owners running the franchise and making changes, but of course they are very used to it now. As a franchisor, Riverford were brilliant while we were making the purchase, and were very supportive.

FS:  How has becoming a Riverford Franchisee changed your lives?

HD: Importantly, Riverford has become more than just a business or a way to make a living; it’s become a lifestyle, and an opportunity to help create a sense of community where we live.

It’s also given us more time together as a family, which is something we really wanted. And being a Riverford franchisee has actually helped with family logistics, too. Whereas before, we had to worry about childcare all of the time, now that’s no longer a concern.

All round, buying the franchise has been a positive move. It means we no longer have to grapple with commuting to London, we spend more time together as a family, enjoy more flexibility, and we have a very healthy income from the business, too.