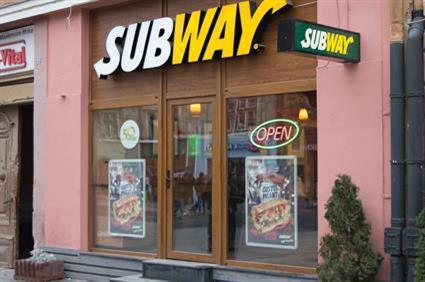 If persistence was the decisive factor in Subway founder Fred Deluca’s success, then his seemingly unquenchable thirst for global domination is what powers the lightning-quick expansion of his fast food empire.

From the very outset Deluca, who opened additional Subway outlets even as the first four made losses, set himself a goal of opening 32 stores within 10 years.

To achieve such rapid growth he decided to franchise his submarine sandwich business in 1974, nine years after opening the first one in Bridgeport, Connecticut. DeLuca persuaded a close friend to become his first franchisee.

Over 40 years on from the inception of the business, the Subway franchise now has more outlets than McDonalds in the US – remarkable given the ubiquity of the golden arches.

Yet Deluca still wants more. In a recent interview he said:

"I say to [new development agents]: 'OK, you must become the biggest fast-food chain in your country’."

Subway has more outlets than McDonalds in the US

Alike in the fact that they are quick-growing franchises providing food quickly, Subway and McDonalds nevertheless differ substantially in one key way.

Fast food has taken much of the blame for Britons’ expanding waistlines, rocketing diabetes rates, deformed chickens (KFC being the accused) and the homogenisation of our town centres. Subway, while contributing to the latter phenomenon as much as any franchise, has altered the assumption that when food is fast, it is unhealthy.

Admittedly the 12” ‘subs’ are still pretty calorific, but at least there’s a range of fresh salads to go with meat, fish or vegetarian fillings. McDonalds has added a salad range to its menu in response to negative publicity surrounding dietary habits in the western world, but the perception persists that it is a purveyor of high fat and sugary goods.

As well as the freshness of the bread and salads, Deluca’s formula works so well because the sandwiches are custom made, they are made in front of the customer, and most other sandwich shops do not offer such a wide range of fillings.

As successful as the Blitzkrieg-like rollout of Subway stores has been, however, Deluca only opened Subway in the first place because a family friend, Doctor Peter Buck, suggested it as a way of paying for college, putting up $1k of finance.